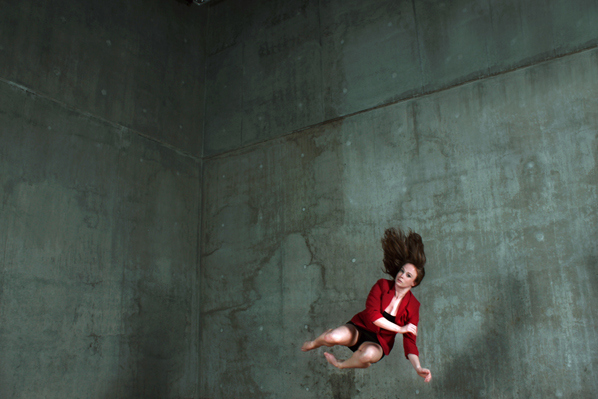 As the final episode in Retina Dance Company’s trilogy about the relationship between the body and different art forms — text in Eleven Stories for the Body (2005) and visual art in This is not a Body (2007) — Artistic Director Filip Van Huffel’s Corporalis takes architecture as its point of departure. It sets out to ‘explore the relationship between personal space, architectural space and three-dimensional space.’ The 20-minute opening section of Corporalis — in which Van Huffel effectively sets up a quintet between dancers Matthew Slater and Erin Harty, set designer Ruimtevaarders’ steel wall unit, Andrew Hammond’s lighting and Marieke van de Ven’s soundscape — is so well crafted and its unity of elements so complete that it sets up a huge expectation for what follows. Van Huffel’s vocabulary finds full expression in these two dancers — Slater and Harty have a palpable chemistry that fills the stage (and what a great stage the Playhouse is for dance)— and an aural and visual setting that evidently inspires him. The problem is what to do afterwards? Interestingly, Van Huffel had not intended to open with this section but with the solo that follows. Perhaps a further re-calibration is required to balance the entire work, for in retrospect the brightness of the opening section leaves the remaining two thirds of the show — apart from two or three exceptions — in its shade.

Slater and Harty begin with their backs against the steely, reflective surface that is set at an acute angle to the audience; the two dancers create a smudge of colour on the metal as they begin a series of slow introductory arm and torso movements. There is a wisp of smoke in the air that adds an even softer focus to the diffused light, suggesting a dream, but the score pricks the couple into sharper, more thrusting movement in place, repeating the same gestures with increased vigour. The metal wall, which is a series of three mobile panels, rotates to face us and the light beats on it like an anvil, changing the illumination and the spatial quality. Slater and Harty repeat earlier motifs, separately and then together until the wall moves again to articulate a slight angle between two of the panels, the tiniest suggestion of an enclosing space. The dance begins to work up with jumps from a low position until the two dancers are flinging themselves to the floor before the rush of adrenalin recedes like a tide. At one point Slater’s body is reflected in the wall as he watches Harty, whose shadow is projected on to the wall next to him, a lovely play of light and form. Harty winds up into a fury, throwing herself into the air where she seems to hang effortlessly before landing on the side of her thighs.

Throughout this section, Van Huffel integrates imaginative and expressive gestures — Slater has a passage in which his pecking head and undulating back are reminiscent of a courting pigeon — into what could be the play of two teenagers leaning against a wall wondering how the evening is going to end. Van de Ven includes a section with children’s voices that matches the innocence of the action, and as the walls move back, the movement grammar opens up with it. Slater and Harty repeat the opening sequences but they are now quite different in the larger space. Slater disappears behind the wall and Harty delivers a beautiful solo that she continues into a blackout as if she never wants to stop.

A very different, extended solo follows, demonstrating not only the effect of architecture on the body, but of the body on architecture. The wall is the same, but Steven Martin has a different energy and a more introverted dance that has its ticks and drama but feels like a rather long monologue that has been seamlessly dropped into the place of a vibrant conversation. The tone softens, and the space diminishes. We first see his bearded figure lying on the floor as if shipwrecked in a blue light, floating on the water’s edge. When he stands he seems very tall, wearing an open jacket (whose flapping competes with his own movement) over his naked torso and with a rapid frisking of his body signals he is trapped in a painful place, a prisoner in his own cell. There is an oppressive buzzing sound of an electrified fence in the score, underlining some malaise. Towards the end of his solo, Martin covers his eyes as if he is about to die, but just as he stands, Pauline De Laet arrives on the other side of the stage in the same pose and to a deep trumpet motif swims towards him like an angel. He watches his saviour getting closer, and as soon as she is within reach begins to manipulate her, sitting her finally on his shoulders like a prizefighter carrying his victor.

Harty returns to form a trio and then Slater to make a quartet, repeating phrases in canon, but it is immediately apparent that the two couples, who are now meeting for the first time, are quite different and their spaces clash. At this point, Van Huffel offers them a jewel: in the violin introduction to Handel’s aria Cara Sposa from Rinaldo that van de Ven has woven into the score, the quartet of dancers stands reverently still against the wall in a white light. The harpsichord continuo resonates with the metal wall, the counter tenor with the light, and again there is this remarkable unity between the theatrical elements. When the dancers move with the emergence of the voice, their backs leave a damp stain on the wall from which the music seems to arise.

In the closing sections of Corporalis, in which there is still plenty of action in various convolutions, Van Huffel has one surprise and a treat. When the two boys carry De Laet off, Harty is left to dance alone, but now the wall is moved all the way to the side, so the stage recedes all the way to the back of the theatre in black. At the same time van de Ven introduces the sound of traffic, as if we have just opened the door to go outside into the street. Harty repeats earlier phrases, but interestingly the change of stage size engulfs her; we begin to lose the sense of what she is doing: a reminder of the effect of three-dimensional space on our actions. When the wall comes back there is a brief opportunity to gather back the momentum, a moment in which De Laet dances alone, a bright and sparkling juxtaposition of outward reflection and internal process. It is as if we are seeing her for the first time, but it is tantalizingly brief. She tries to break through the wall but we hear the return of the electrified fence. The lovely light on her and in her fades too quickly to black.